Hoshangabad is a beautiful city in the Indian state of Madhya Pradesh. This city lies in the central Narmada Valley and on the northern fringe of the Satpura Plateau. Hoshangabad which was earlier known as Narmadapuram after the Narmada River gained popularity during the reign of Hoshang Shah, the first ruler of Malwa. The economy of Hoshangabad largely depends on agriculture which is one of the largest producer of Soya Bean. The land is fertile with proper irrigation facilities from the Tawa reservoir. Cultivation of soya bean and wheat are major sources of income in the area. 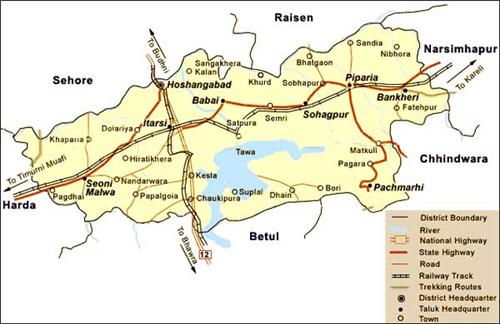 Places of Interest In & Around Hoshangabad

Hoshangabad being one of the fast developing cities in India attracts tourists and visitors from far and wide. There are many famous beautiful locations and monument in and around the city. From beautiful temples to historical monuments and national parks there are all and more to attract the eyes and attention of the visitors.Some of the most popular places to visit while traveling to Hosangabad are:

Hoshangabad located near Bhopal is well connected with other parts of the country. Youc can reach the city via Bhopal which is about 70 kms. away from it. You can travel via roadways or railways to reach the famous city of Hoshangabad. The city is well connected also with Itarsi and Sehore. Sehore Bus Station is the nearest bus terminal. Read More........

Two main rivers Narmada and the Tawa flows through Hoshangabad district and join each other at the village Bandra Bhan. These two rivers go along the northwestern outskirts of Hoshangabad. Every year on the eve of Kartik Purnima a holy mela organized . The other small rivers are Dudhi and the Denwa. There is also one very big lake at Pachmarhi, which is one of the main tourist place to visit and a hotspot to enjoy boating in various types of boat.

Geography and Climate of Hoshangabad

Hoshangabad located at 22.75°N 77.72°E and lies at about 331 meters above sea-level. It is a green and sprawling city, especially characterized with huge, ancient banyan trees lining the road side. The climate of Hoshangabad district is normal, tourist comes in all the season. Overall, the climate of the district is neither hotter nor cooler except the winter season of the Pachmarhi. Days tend to be dry and sunny and mornings and evenings turn to hotter. Summer in Hoshangabad begins in March and continues till July. The peak temperatures may rise till 42 degree Celsius, usually in June. Every year, during the receding days of summer and before the onset of monsoon in July. After the months of summer, monsoon begins in July and usually lasts through October, with July receiving the most amount of rainfall. The weather considerably cools down to an average temperature between 22 to 28 degrees Celsius, with an average rainfall of 1343.6 mm.The average rain fall is 134 cms while maximum and minimum temperatures are 32 deg.C and 19 deg.C respectively. November indicates the onset of winter in Hoshangabad. The minimum temperature in the past years during winter in Hoshangabad has gone down to 10 degree Celsius. But on an average, daytime temperatures are 28 degree Celsius and the nights are cold at degree Celsius. Overall, the climate of the district is neither more hot nor more cool except the winter season of the Pachmarhi. Read More.......

Fairs and Festivals in Hoshangabad 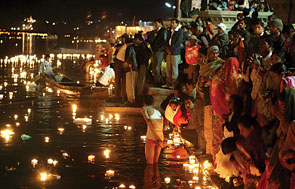 Hosangabad is known for its rich culture and heritage. It attains festive look on the pious occasion of Makrasankranti, Mahasivaratri & all Amavasyas when devotees from all corners throng to the place to take holy dip in famous Sethani ghat on banks of Narmada river. Narmada Jayanti celebrated in the winter season is another popular local festival of the region. Moreover every year a mela is held in town on the samadhi of Ramji Baba which witnesses lot of crowd from adjoining districts.

Agriculture is main source of income in Hoshangabad. Hoshangabad district has total 227795 hectare land out of which net irrigated area is about 179559 hectare land is double cropped area. The city also represents the greenery with 2229.74 square kilometer forest area. It is one of the largest producer of Soya Bean. The land is fertile with proper irrigation facilities from the Tawa reservoir. Cultivation of soya bean and wheat are major sources of income in the area.

Emergency medical services are a boon to human life, while it’s in the struggling period. Most common and visible means of this emergency service is the one that transports patients to the hospital i.e. an Ambulance. Vans are usually used for this. All major hospitals in Hoshangabad have promptly been running ambulance services. It makes, in spite of being out of hospital, acute medical care, definitive care and other medical services accessible to the patients.

Government hospitals and private dispensaries are also available in the district providing health care to the suffering patients. These hospitals and clinics are equipped with hi-tech medical equipments to deliver desired result. From Family Planning to Eye Checkups Camp, Vaccination Programs they take part in all major state government programs. District also runs the Jiwan Jyoti Programme in which it provides the mobile clinic for Tribal Areas.

Hoshangabad has a lot of premium facilities in schools and in sports club to boost the morale of sports lovers. Normal sports which are famous in Hoshangabad are cricket, hockey, football, tennis, badminton, traditional wrestling and table tennis. Read More.........

Hoshangabad at a glance